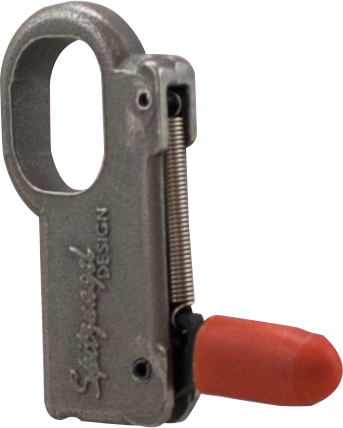 The DF-900PF is an innovative pull finger that attaches to a welded pin for dent pulls on automotive aluminum panels. Simply slide the pull finger over the stud to engage. The slide finger will hold onto the stud until it is disengaged by pressing the release lever. Dent Fix pull fingers are quicker to attach and disengage than screw-on type pull fingers.

Attach a pull devices to the fingers for a reliable and sturdy pull. For crease pulls, multiple pull fingers can be used together when attached to welded studs in a row. A bar can then be fed through the pull finger eyelet and attached to a bridge puller.

Dent Fix's Pull Finger, when used with Dent Fix Alu-Studs DF-900PS and DF-900PM, is also adjustable. Due to the extra length of the Alu-Stud pin, the pull finger can slide up or down the pin if an adjustment needs to be made mid-pull. This adjustment feature is not available when using screw-on fingers.

Save this product for later
Display prices in: USD